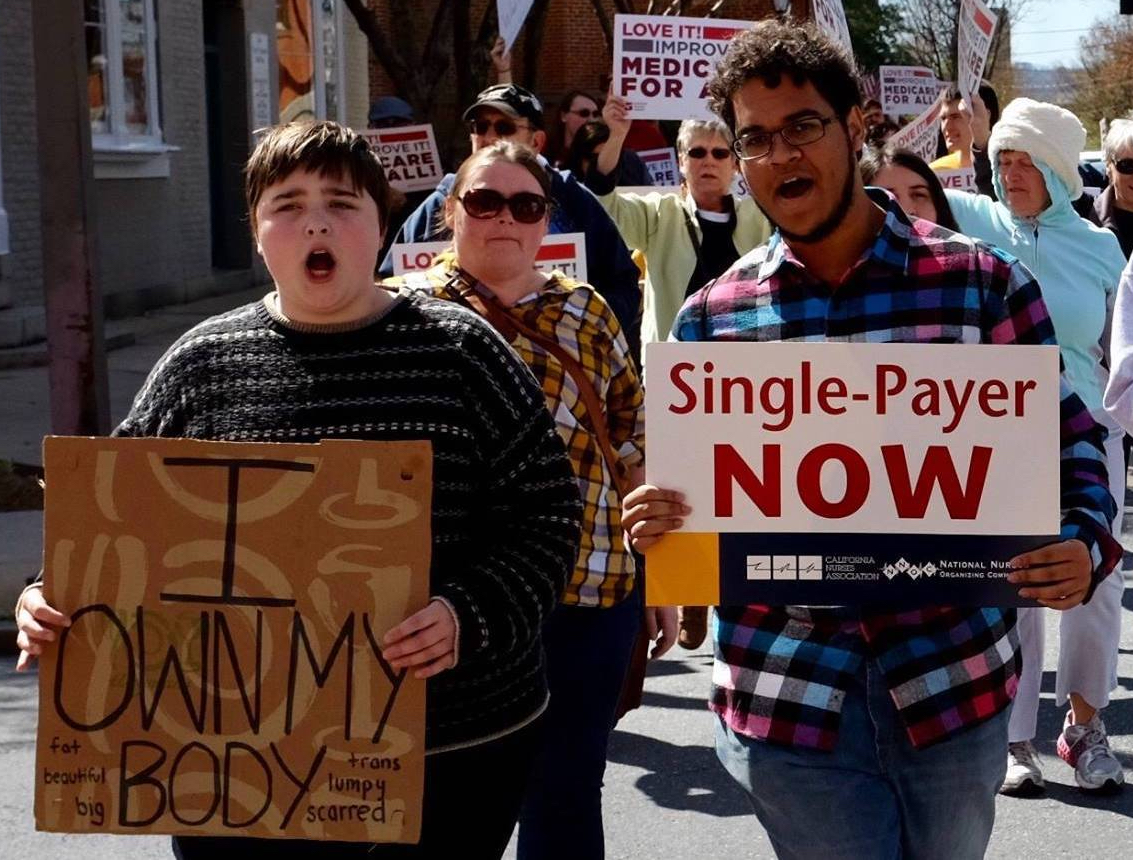 What is the buy-in?

The Medicare buy-in is one of many “moderate” alternatives to Medicare for All proposed by centrist House Democrats that offer no solutions for millennials. Led by Rep. Brian Higgins (D-NY), the legislation would allow people between the ages of 50 and 65 to buy into Medicare plans through state health exchanges. According to The Hill, Higgins won the support of Nancy Pelosi in prioritizing the bill in 2019 in exchange for supporting her bid to become the next Speaker of the House.

Higgins’ buy-in plan is yet another version of the public option, which has been floated as a more market-friendly alternative to Medicare for All for decades.  While popular with industry-friendly politicians, research into the likely outcomes of a Public Option – including a Congressional Budget Office scoring of a more expansive proposal floated in 2013 – shows that it would prove useless in reducing uninsurance and underinsurance.

Higgins and his supporters will tell us that the buy-in is “a step to Medicare for All”, that if young people accept it and wait a few more years, we’ll get guaranteed healthcare. But the buy-in does absolutely nothing for young people who are struggling to survive now – and it will only serve to divide us and distract us away from demanding what is owed to us as a basic human right.

1. The buy-in reveals a lack of loyalty to the young people who built “The Blue Wave”

Medicare buy-ins, Medicare expansions, Medicare being allowed to negotiate prescription prices – these are the primary health policy goals of the DNC at present. Most of them exclude millennials – and a larger public option (Medicare or Medicaid buy-in) would still require us to be able to afford to pay for a premium.

Any healthcare policy that the Democrats choose to pursue must include us. And these promises have to be more ambitious than the ACA. Too often, Medicare for All is dismissed as an idealistic goal. But young idealists have already shown tremendous leadership in resisting Trump’s destructive agenda, in knocking on doors for candidates, in having those difficult political discussions with our parents.

The “Blue Wave” wouldn’t have happened without this idealism. Young people traditionally have a lower turnout in midterms. But in 2018, the youth vote was three times its size in 2014, with 67% voting democrat. It is not naïve for young people to expect more from politicians. They work for us – not the other way around.

Young people today are in a worse economic situation than was faced by our parents or grandparents. Two thirds of us between the ages of 21 and 32 have zero retirement savings. The costs of food, housing, utilities, fuel and healthcare have gone up, while wages have stagnated for decades. We are less likely to own a house or have kids because we can’t afford it.

Good jobs with healthcare benefits are increasingly sparse. The situation is most difficult for women of color in full time low wage work, who are more likely to be uninsured or dependent on a partner for healthcare. 41% of all women under 25 are dependent on a partner or parent for healthcare. And with nearly a quarter of all women relying on a spouse for insurance, it forms a substantial barrier that prevents women and their children from leaving abusive relationships.

All economic indicators point towards an increase in automation and the expansion of low-wage service work. The unemployment rate may have improved, but with the rise of contractual and temporary work in skilled professions, these problems aren’t going away.

In addition to these economic challenges, our generation faces new, climate-induced health risks, from the Zika virus to asthma attacks caused by raging forest fires. A vast body of disaster management research shows that universal healthcare systems (without fees, co-payments or deductibles) are necessary to sustain a population through major disasters like floods and hurricanes.

Single payer won’t fix our economic woes – but it will ease the disproportionate burden that young people face.

3. The Medicare buy-in is a government handout to the insurance industry.

Medicare works because everyone is automatically enrolled as soon as they qualify. The administrative costs of running payments, processing applications and uploading new people into the system will compromise these savings.

As for the buy-in, only states with health exchanges will be able to offer it. Undocumented immigrants will not be able to purchase a plan – in contrast to Medicare for All, which would cover everyone living in the US.

And here’s a crucial thing for young people to know about the way that Medicare is run today: a third of Medicare enrollees have purchased private “Medicare Advantage” plans, administered by insurance companies who make sizeable profits off of government money. Medicare Advantage is attracting huge investments from venture capital firms, with investor websites advising people that buying stocks in these new companies will offer guaranteed high returns. But to the taxpayer, it’s a rip-off.

Previous versions of the Medicare buy-in (the new bill hasn’t been released) stipulated that insurance companies will administer the new plans on the exchange. If there’s no evidence that a public option can work, and if even just a fraction of the buy-in customers are expected to use private plans – that means that the main purpose of the policy is first to line the pockets of the insurance companies – not to get healthcare to the people who need it most.

National Improved Medicare for All would eliminate the insurance industry. It’s the only way to reduce costs so that we can create a federally-financed system. No plan that encourages the expansion of Medicare Advantage can be compatible with Medicare for All.

4. Any plan to bring down costs has to include us.

When healthy people (and younger people tend to be healthier) buy insurance, it lowers costs for everyone. Democrats know this. For years, the shortcomings of the ACA were blamed on young people who didn’t buy plans.

The health exchanges have brought healthcare coverage to many people who need it – and those of us who have been able to afford it are grateful for the extra opportunity. But high premiums, high deductibles and high copayments have meant a sicker risk pool (i.e., people who expect to spend thousands on healthcare costs are more likely to buy them).

The only way to drive down the costs of healthcare is to put everyone into the same pool – and the experience of the ACA shows that incentives and subsidies and even tax penalties can’t force healthy young people living in economic precarity to buy healthcare.

As an expansion of a public social program into a privatized marketplace with even more limitations than the ACA, the Medicare buy-in risks yet another step towards the overall privatization of Medicare, compromising the very structure that has made the Medicare program so successful.

5. It wouldn’t have helped the people who died from rationing insulin.

Alec Raeshawn Smith(26). Antavia Lee Worsham(22). Shalynne Vilela(22). Just a few names of young people who have died in the last two years because of insulin rationing. More and more patients are dangerously spreading out doses in order to save money. A cartel agreement between the producers of insulin – a drug that costs little to manufacture – has engineered massive price hikes for the consumer.

In the richest country on the planet, it is barbaric and unacceptable that these deaths happened. Any politician proposing an alternative to Medicare for All must be asked this: would it have saved them? The Medicare buy-in wouldn’t, and most of the drug price proposals from Democrats wouldn’t, either – except for Medicare for All.


6. A healthcare policy that doesn’t help young people is austerity under a different name.

Most often, austerity is a decision of a government to cut public services in response to an economic crisis. And while a buy-in isn’t a cut, it follows the same logic used by pro-austerity governments to justify citizens as lazy or undeserving of government support.

Centrist Democrats love to tell us that they think healthcare is a human right. This bill doesn’t match that declaration. Instead, it conveys the message that only people who have earned the right to healthcare through decades of supposed participation in the workforce can have it – if they are ready to pay for it.  Never mind that we work longer hours and face higher living costs than our parents did. Never mind that with climate change running out of control, we (and our children) will endure more risks to our physical and financial security.

There are many reasons why a Medicare buy-in, despite what its proponents say, is not a bridge to Medicare for All. The buy-in encourages the assumption that some people are more deserving than others when it comes to the provision of a basic human right. No healthcare policy that divides people into categories of moral worthiness in this way can contribute productively to a policy that requires a national mood of solidarity and mutual interest.

“Everybody in, nobody out” is a mantra that millennials feel more than any other generation. Considering that we hold the keys to the future, politicians would do well to listen to us.